Sometime in 1939, the treasurer of La Proteccion de la Infancia—Gota de Leche (LPI-GL) turned over documents in his custodianship to the LPI-GL incumbent in a two page inventory of documents.

The documents show that the first asset of LPI-GL was a donated structure at 41 San Pedro, STa. Cruz, Manila. Held by the municipal government Dr David Doherty offered to buy the property for 9000 on December 3, 1906 after the Municipal Council advertised for bids on the property in October 31, 1906. (Documents Set 1 References 1-81) Dr Doherty executed on April 4, 1907 a deed of donation of this property in favor of LPI-GL. Acting President Concepciono Felix G Calderon accepted the donation.

He made two installment payments to the municipal government of P3000 on Feb 21, 1907 and again on Dec. 3, 1907. On Dec 16, 1907 Doherty paid the city P280 in interest charges with an outstanding balance of P3000. It was only on May 16,1908 when another P1000 was made, which apparently worried Doherty. This could be why he expressly instructed in his last will that he wanted the balance paid by the LPI-GL, or he was bequeathing the property instead to the Archbishop of Manila for him to decide on what he deemed best for the infants. (Documents Set 2 ref 85-86).

On December 27 ,1911, LPI-GL acquired a plot of land from/owned/or administered by the Pasay Estate Company. Source of funding not evident or donor not found among the documents. 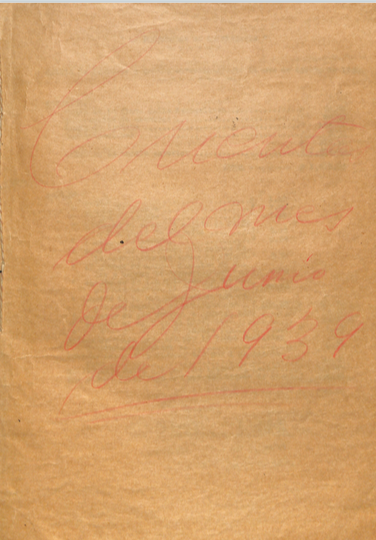 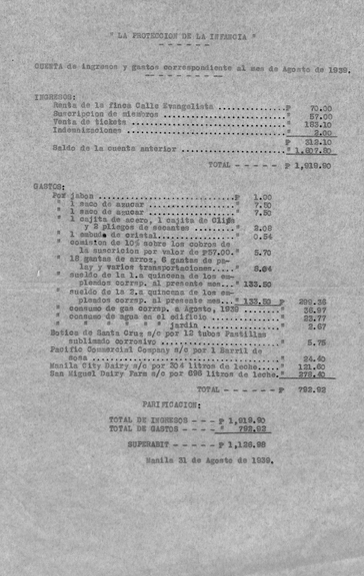 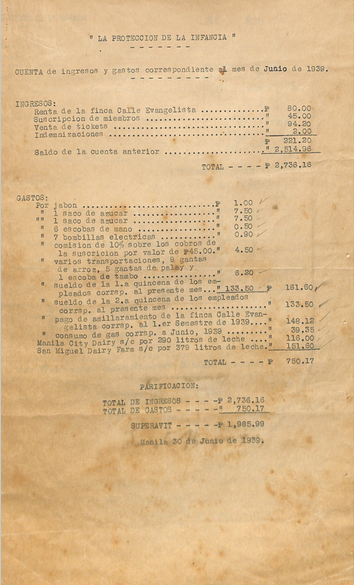 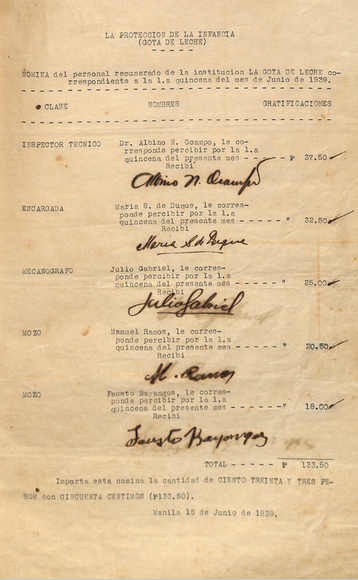 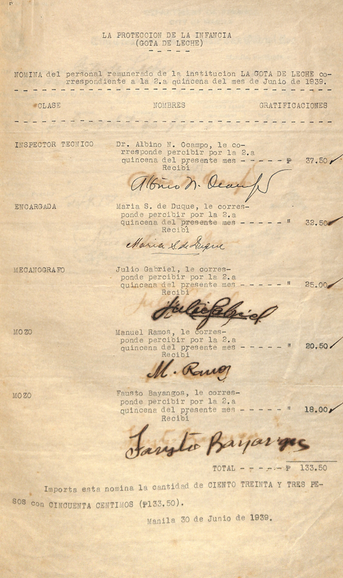 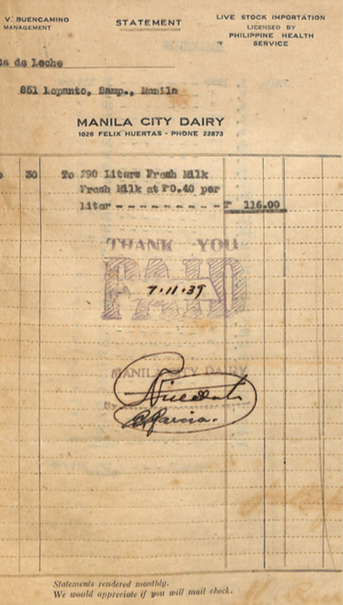 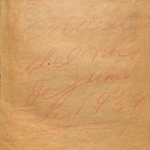 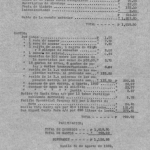 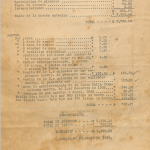 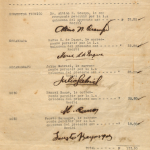 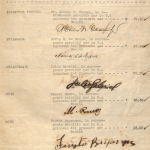 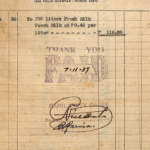 The Documents in this set include the last testament of Dr Doherty, the original Articles of Incorporation, the original source ownership and property history of the Quiapo property, the tenants of LPI-GL in its properties, the documents about the Children’s Hospital which was planned March 26, 1941 ; original deeds of sale and agreements entered into by LPI-GL, communications with the municipal government.

These documents were insurance policies and payments from 1938 to 1948.

1902: Beriberi claimed the lives of thousands of Filipino children

Coming out of the Philippine-American War, hunger and disease spurred the rapid spread of beriberi among mothers. 800 out of every 1,000 newborns died before reaching 3 months old, and the Philippines reached the highest rate of infant mortality in the world before it was discovered that the tainted milk of infected mothers was causing these deaths. A group of women leaders noted this alarming condition and decided to do something about it.

1905: The Asociación Feminista Filipina was established

At the beginning of the 20th century, Trinidad Rizal, sister of our national hero joined the farsighted women leader Concepcion Felix, and other educated women, to form Asociación Feminista Filipina in 1905, a trailblazing organization dedicated to the welfare of women and minors, with a special focus on infant mortality.

1906:  The infant deaths crisis following the Philipppine War of Independence led  to the founding of Gota de Leche in 1906, which saw the establishment of a milk station and dairy, a socialized distribution system of pasteurized cow’s milk, and the formulation of maternal nutrition and education programs as its first activities. It set up of a system of service delivery in communities, a template followed nationwide by puericulture centers and government social service facilities in the coming decades.

1907:  La Protección de la Infancia, Inc., the country’s first independent charity organization was formed, gathering business and civic leaders, and medical doctors among its founding members. The founders’ ability to save the lives of hundreds of babies was so impressive that, during its inauguration, the highest government officials of the country described the founders of Gota de Leche as “nothing less than heroes.”  The initial investments and infrastructure needed to put up the organization was a showcase of civic consciousness.

Oct. 31, 1906 The original Gota de Leche site came from a donation of a believer in the cause, who purchased a property sold by the  Municipal Board of Manila through advertised public bidding of a property at No. 41 Calle San Pedro (now Evangelista),in Quiapo, Manila.

Dec. 3, 1906 The  donor was David Doherty who  offered to purchase the said property at P9,000, a bid that was accepted by the city government.

Feb. 20, 1907 Deed of sale of Escuela Municipal de Quiapo and Solar was executed.

Feb. 24, 1907   Northern Trust Company was designated executor/administrator of the estate of Doherty.

Apr. 4 , 1907 Deed of donation of the San Pedro property was executed by Doherty; Felix  Calderon, LaProteccion, president, accepted the donation.

May 5, 1907 Doherty signed his will in the presence of Jose Asuncion and Felipe Calderon.

May 16, 1908 Doherty added P1,000 as his payment on the San Pedro property. With some disappointment that the organization had not raised the amount to pay the balance of P3000, Doherty noted in his will that he wished that the balance for the property be paid, and if unfulfilled, the donated property would be entrusted to the Archbishop of Manila for him to decide on what best to do with the infant beneficiaries of LPI-Gota.

This is an indication that the organization was short in its finances in its founding years.

Feb. 5, 1913 Deed of donation of the land on Calle Lepanto,, Sampaloc, Manilla made by Dr. Teodoro Yangco in favor of La Proteccion de la Infancia.

June 24, 1938 The largest transaction noted in the surveyed records :  LPI-Gota sold a its Pasay property for Php 60,000 , signed by President Natividad Almeda Lopez et al as authorized by the Board, to Royal Lawrence Rutter, an American, in installment.

(Documents showing how this property was acquired by LPI-Gota still to be researched on.  Also to be further studied: Why it was sold, for what purpose, how the money was spent)

April 22, 1941 Information on the demolition works of the old farm and the construction of two stores on Evangelista Street and 2 apartments on Palma Streets, Manila of which the contractor was Gocheco& Co. Inc.

April 1940-1941   Researched documents  (References Set II 181-197) showed Gota was earning some income in rental fees from its leased properties  to various tenants in amounts ranging from P45 to P 120; The treatment of tenants showed a very respectful and considerate attitude to tenants, as for instance, after the  demolition of rented units for repairs, LPI-Gota gave written assurances of resumption of rent after rehabilitation of rented properties. ( Ref 190-192).

Philippine and American officials rewarded Gota de Leche with annual funding through the Philippine Charity Sweepstakes and the Community Chest. This support enabled Gota de Leche to establish the Manila Children’s Hospital and expand its services to disease prevention and treatment, benefiting thousands of poor children after the war.

Not even World War II stopped Gota de Leche from serving children and mothers. Unnamed citizens donated services, utilities, land, furniture, dairy animals, and even fresh milk from their own backyards so that the feeding and nutritional services continued, uninterrupted.

In recognition of its work, the Philippine Congress and the City of Manila allocated government funds regularly to Gota de Leche, while Manila’s most prominent families and companies donated services and resources to keep it going.

Gota de Leche’s then-President, Natividad Almeda-Lopez, established the first pediatric hospital in the country, with free medical services for up to five thousand children each year in its first 10 years.

The first to discover hemorrhagic fever were Manila Children’s Hospital doctors Florencio Quintos and Lino Ed. Lim among their young patients. Because of this medical breakthrough, WHO sponsored the First Asian Medical Congress in Singapore in 1958.

When it opened Manila Children’s and Lying-in Hospital in 1974, Gota de Leche began helping mothers by providing obstetric and gynecological as well as family planning services, and continued to do so for 25 more years.

Gota de Leche continues to provide Nutrition Assistance to indigent children through distribution of milk, food and supplements to qualified 3-to-7 year-olds. This helps families manage the health of their malnourished children so that they may be able to reach and sustain normal growth. Paediatricians regularly monitor the growth and address the immediate medical needs of its beneficiaries.

Other services are rendered in cooperation with Gota de Leche’s institutional partners, and may range from offering free dental services or imparting information on common ailments, to simply playing educational games with the children.

2003: The Gota building is declared a National Heritage Site

The remarkable historical legacy of Gota de Leche is symbolized by the Gota de Leche Building, a declared national heritage site. Conservation efforts of Gota de Leche’s duty-bearers resulted in the citation by the UNESCO Asia-Pacific Heritage Awards in 2003. This was further supported with grants from the National Commission on Culture and the Arts.

who is gota2013: The Breast Milk and Brown Rice Program

Gota de Leche supports nursing mothers of malnourished younger children through the Breast Milk and Brown Rice program, ensuring access to complementary food rations for both mother and child. Volunteers come and provide information on diet and keeping healthy to their parents.

In these trying times, Gota de Leche has continued to take up the responsibility to help mothers and children in the Yolanda devastated areas in Central Philippines. It has also opened its doors, literally, to those displaced by the typhoon.

Packed this afternoon in just 2.6 hours by Forever […] 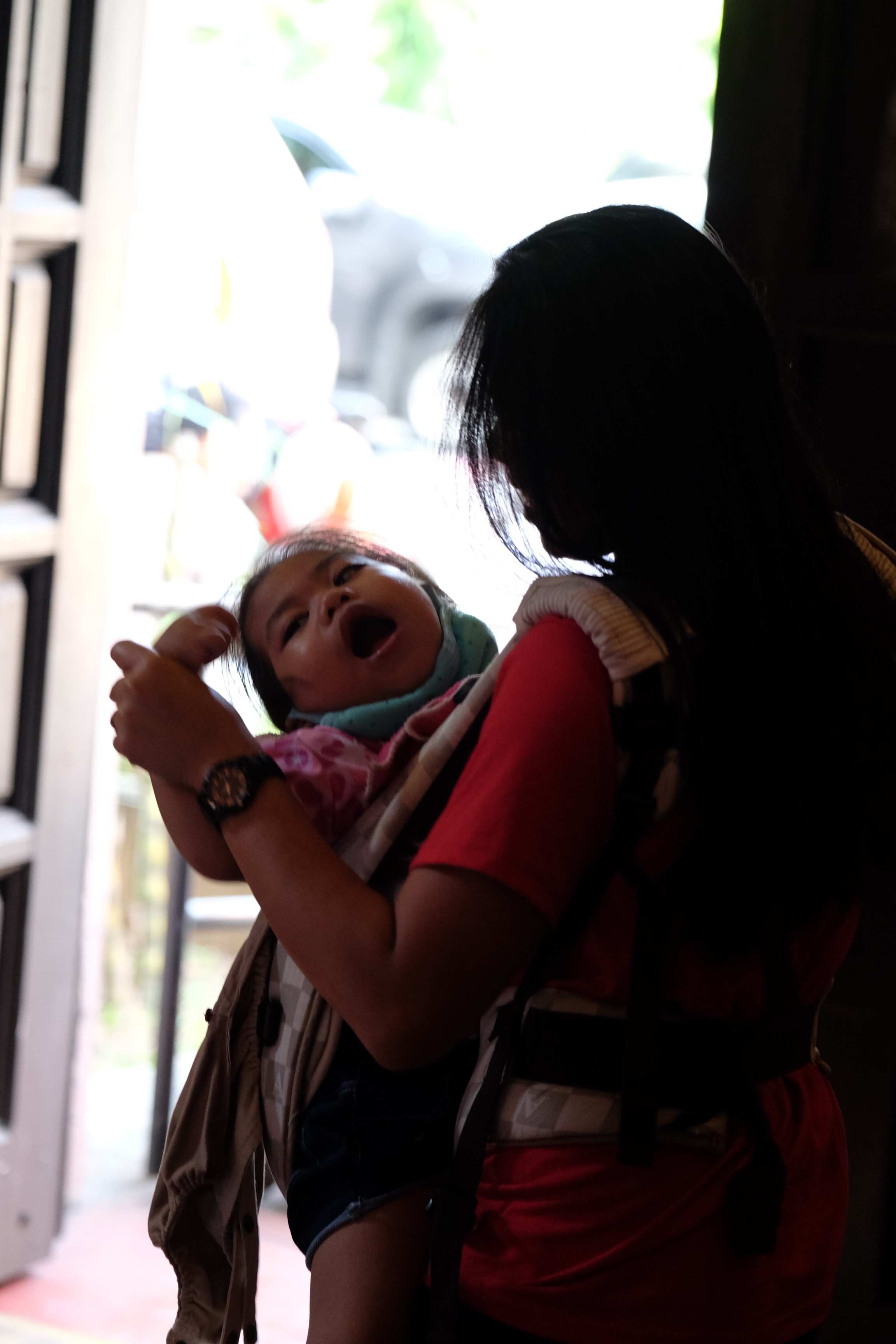 AT THE CRACK of dawn every third Thursday for eight […] 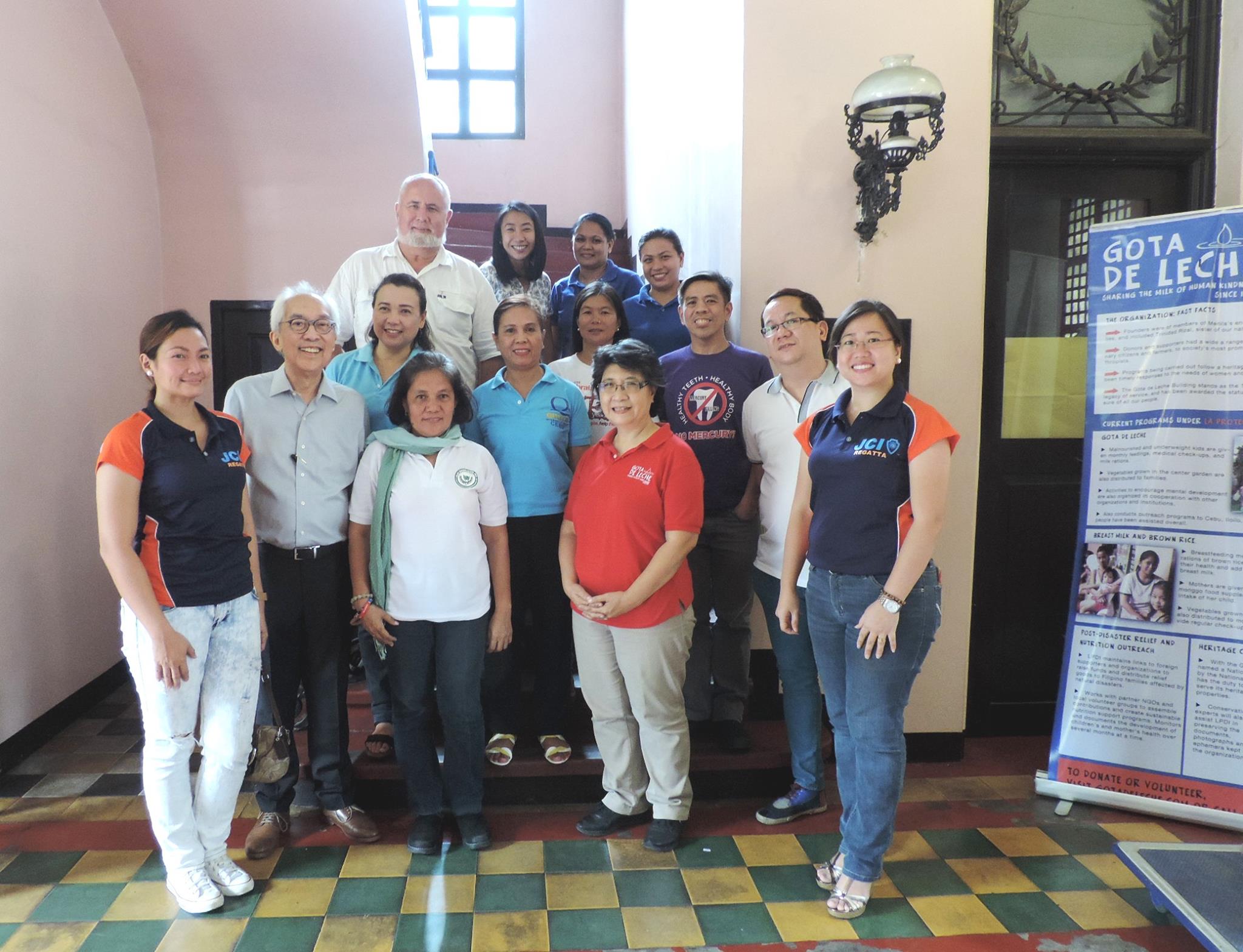 Yesterday, the Program Partners of Gota de Leche in Tondo, […]